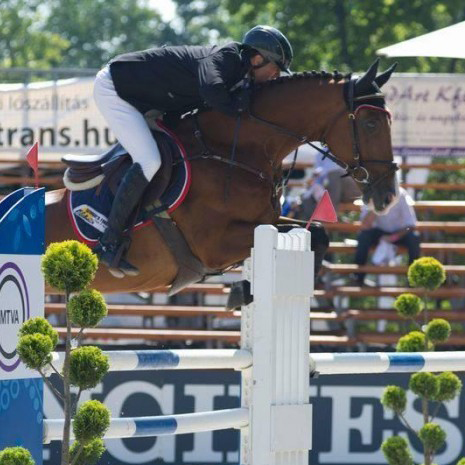 Szabolcs was born in 1977 in Mezőhegyes, Hungary to a family with strong equestrian tradition. His father, Ferenc Krucsó is a well-known show jumping competitor and coach, who took part in the 1980 Olympic Games in Hungarian colours. His mother, Erzsébet Gergely, has also been riding since her childhood, and she too used to compete in show jumping. Maternal grandfather, Imre Gergely was the “horse stirpiculturist” of the State Stud of Mezőhegyes, that is, he led the horse breeding programme for over 35 years at the State Stud. His brother, Balázs Krucsó is also an internationally renowned show jumping rider, who currently competes and manages his riding center in Germany.

Szabolcs and his brother Balázs grew up in Mezőhegyes and under the guidance of their father, started riding at a very early age. When he was 15, Szabolcs was sent Germany to further hone his riding skills. First, he rode in Peter Schütte’s riding center where soon he got the opportunity to compete. Afterwards, he went over to Paul Schockemöhle to work as a rider.

He came back to Hungary for a few years to finish his studies. During this time, he worked as a rider for the State Stud of Mezőhegyes and despite his young age, he already participated at a number of Grand Prix events, earning national and international acclaim competing for the State Stud.
Afterwards, Szabolcs and his brother continued their career at the B&H Lovasklub, private stables, which at the end of the 90s provided almost unparalleled conditions for the young Krucsó brothers. At this time he worked and competed with a number of horses that became known in Hungary by him, including the well-known stallion, Carrad.

Following the years in Szeged, Szabolcs and Balázs worked in Germany where they rode and competed with horses of different owners and also started trading horses. They participated in numerous competitions, Szabolcs, among other excellent results, won the Westphalia championship.
When Szabolcs decided to come back to Hungary, he started working in association with the Bábolna National Stud but he had already established his own company to ride and compete with the horses under his care.

He started building his own stables in the Váli valley, near Budapest, in 2004, which he manages to this day.
Szabolcs got married in 2009; with his wife Anna they have two children: Bendegúz, born in 2010 and Karolina, born in 2013.
For more than ten years he has almost always been a member of the Hungarian team, led the national ranking for years and is still currently in the top 10. He has won World Cup and Grand Prix events, came 11th in the Lanaken FEI World Breeding Jumping Championships for Young Horses. He has won or been runner-up with the Hungarian Team at Nations Cup events, been 3rd and 4th place in the Hungarian Championship, won a number of Puissance show competitions (his current record is 2.15 m).